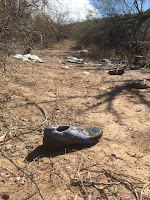 A couple days ago, I went with a group from No More Deaths and Ajo Samaritans on a trip to leave bottled waters in the desert near Ajo, Arizona. After a few miles walking, someone from our group noticed a human skull underneath some bushes. We paused and spent some time in silent prayer. It was my first time encountering human remains in a corridor used by migrants to cross from Mexico into the U.S. Some of us in the group had previous encounters, but it is still had a big impact for them. As per the established procedure, we called the Sheriff Office using a satellite phone and waited until the deputies arrived. We also scoured the nearby areas to see if we could find more remains. We did find one more human bone, and also some clothing, shoes, backpacks, and a sleeping bag. It is possible that they had belonged to the person whose remains we found.

Hundred of migrants have died every year as they try to cross the desert into the United States. One estimate put the total number to more than 10,000 deaths since 1994. Aside from the political and legal debate about immigration, the fact is that these are human lives! Every human life is valuable, each one of them is created by God and loved by God. 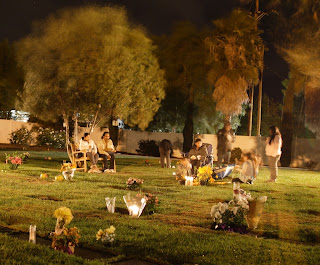 Today, November 2, the Catholic Church commemorates All the Faithful Departed, also known as All Souls Day or Dia de Los Muertos. When I was living at Old Mission San Luis Rey, I saw for the first time the Hispanic tradition of celebrating the day with some kind of a vigil at the cemetery. On October 2, in the evening, families would gather around the grave of their loved ones. They would drink hot chocolate or champurrado, eat some homemade food, and share stories to remember that family member who had gone before them. It was truly a sign of the Communion of Saints! That night, death is no barrier for us, alive and death, to be spending some time together.

Back in the Arizona desert, as we were waiting for the sheriff deputies to arrive, we sat around this human skull that we just found, and started to open our backpacks to find whatever little food we had for lunch. We shared trail mixes, crackers, cheese, and hummus with each other. We shared stories about our lives. At first it felt like a disrespect to this sacred ground where the only appropriate mood seemed to only be a somber one. But then as I thought more about it, isn't this what the Christian paschal mystery is all about? We mourn the passion and death of Jesus, but we also then celebrate his resurrection, his victory over death, by breaking bread and sharing meal with each other. And just like that night on All Souls Day at the Mission San Luis Rey cemetery, we celebrated the life of this person who had died alone in the middle of the desert. Probably for the first time ever since his death, a group of people actually gathered around to remember him and celebrate his life.

Sam Nasada, OFM received his Master of Divinity degree from the Franciscan School of Theology in Oceanside, CA this past summer. He is currently part of a new initiative of the Province of St. Barbara: a small intentional community near the Arizona-Mexico border that is focused on contemplation and helping those in the margins. He hopes that this experience will help in his formation to become a priest who will not be afraid to, borrowing a term from Pope Francis, "smell like his sheep".


Posted by Samuel Nasada Himawan at 9:07 AM No comments: