Franciscans and the Nativity 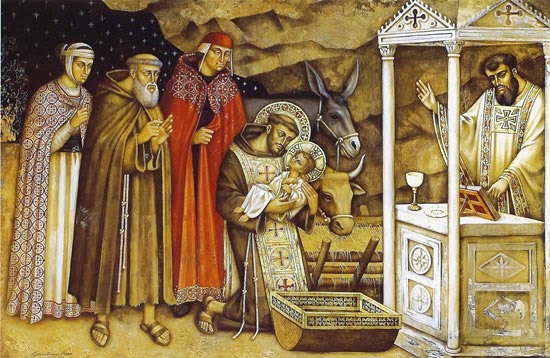 Throughout Christmas and up to Epiphany, God’s word proclaims Jesus’ mastery over creation.  In the Gospel readings he can heal the sick; he multiplies the loaves and fishes; he walks on water.  These miracles demonstrate and remind us of Jesus’ almighty power and how much he emptied himself when he became one with us.  Not as a man, but as an infant.

The Creator of the world could not walk, talk, or even roll over.  The Second Person of the Blessed Trinity weighed just a few pounds; he shivered, cried, and nursed at his mother’s breast.  The message of Christmas and God's incarnation is shocking. He who created the billions of galaxies with billions of stars, who created the countless creatures of our world, became completely dependent on us for his safety, well-being and nourishment.

It seems almost blasphemous to suggest that God became human. Yet, he did so out of love for us.  A testament to who “I” to who “We” are.   That are goodness far out weights our brokenness.  That we are much more than our sinfulness.  So much so that God placed his trust and faith completely in us.  And given our track record of violence he probably should have feared us.

Jesus, became one with us, out of love for us, and amazingly as scripture points out, "we must have the same love for one another" (1 Jn 4:11).  One of the great Christian apologists of our time, G.K. Chesterton, once wrote a parable to illustrate this point:


“A man who was entirely careless of spiritual affairs died and went to hell.  And he was much missed on earth by his old friends.  His business agent went down to the gates of hell to see if there was any chance of bringing him back.  But though he pleaded for the gates to be opened, the iron bars never yielded.  His priest also went and argued:  “He was not really a bad fellow; given time he would have matured. Let him out, please!  The gates remained stubbornly shut against all their voices.  Finally, his mother came; she did not beg for his release.  Quietly, and with a strange catch in her voice, she said to Satan:  “Let me in.”  Immediately the great doors swung open upon their hinges.  For love goes down through the gates of hell and there redeems the dead.”

The incredible graciousness, power, and mercy that came into our world in Jesus is still, at least potentially so, in our world in us, the Body of Christ. What Jesus did we too can do; in fact, that is precisely what we are asked to do as Christians. We are called to enter the world of another; to enter their pain and suffering. We are to be reminders that their goodness far out weights their brokenness. That they are much more than their sinfulness. We are to remind others that they are fearfully and wonderfully made in the image and likeness of God and they are GOOD!


This is the true message of Christmas and the primary mission of the followers of St. Francis of Assisi.  A powerful message of our goodness and the message we are called to share with others.

Join the Franciscan friars of the Province of Saint Barbara in praying the "Collect" and
reflecting on the Gospels of Advent leading up to the powerful message of Christmas.

If you feel called to religious life as a Franciscan friar of the Province of Saint Barbara are you willing to enter the world of another, to enter their pain and suffering?

"Saint Pope John Paul II named Francis the patron saint "of those who promote ecology" in 1979. Ecology in Europe refers to what we in the United States call environmentalism and not just the science. Francis is the patron of those who cultivate ecological consciousness, but that means a lot more than being the patron of environmental educators. His example really points to a mystical or a spiritual vision for all of the creative world as brother and sister, as he describes in his Canticle of the Creatures." - Br. Keith Warner, OFM

While discerning our way of life you'll need to test your desire and abilities to promote and practice this vision within your family, neighborhood, community, etc....  Look for local opportunities to get involved in your community around environmental issues.

As you volunteer or work in this field you'll need to become aware of the movements of consolation and desolation before, during, and after engaging in this work. As you reflect on your experience you'll ask:  Did I experience desolation?  Did I feel weary, dry and dissatisfied?  Did I feel consolation?  Did I feel cheerful and satisfied?  Was I able to engage in these activities with a joyful and generous heart?  These two movements well help reveal the movement of the Holy Spirit in your discernment process.  Read the blog post "Consolation and Desolation" for more information on using this discernment tool.

Next, take your experiences and engage in theological reflection.  Theological reflection is an essential ingredient in the process of spiritual discernment.  It holds the possibility of discerning God's presence and/or direction.  It's the process of standing before your experience 'open' to what may or may not be revealed through the lens of faith.  Read the blog post "Theological Reflection" for more information on using this discernment tool.

Next, share you experiences with your spiritual director and/or vocation director.  This person will listen to your story with an ear for the movement of the Holy, of the Divine.  They will also help you discern between your voice, the world (family, culture, and society) and God's voice within your experiences and theological reflection.  Read the blog post "Spiritual Direction" for more information on using this discernment tool.

Remember to be nourished by the Word and the Eucharist at Mass in order to be sent forth in mission to love and serve the Lord.  Read the blog post "Freely You Have Received, Freely Give" for more information on why Mass is important for discernment.

Lastly, at this stage in the journey you are trying to put on the "habit" of serving the poor and marginalized by promoting care for creation and living in balance with the earth and her resources.  You're trying to see if you have the abilities and the desire to live within and promote this spiritual vision as a religious brother or priest.  The work is not easy, but it's the love of God that sustains and nourishes us in this work.

For more information on St. Francis' vision of the created world as brother and sister and how it  informs our understanding of "Care for Creation" read Franciscan Keith Warner, OFM article published in U.S. Catholic Magazine.