The Lord Gave Me Brothers (Like Didacus!): A Reflection by Br. Juan-Jose Jauregui 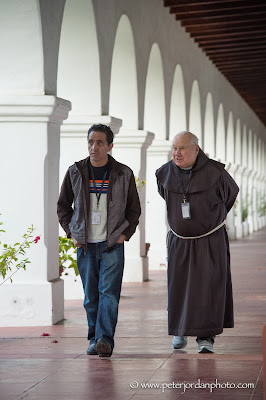 And after the Lord gave me some brothers, no one showed me what I had to do, but the Most High Himself revealed to me that I should live according to the pattern of the Holy Gospel.  -- St. Francis of Assisi, “Testament”


Watching Brother Didacus spending time doing his favorite hobby—putting together his electric trains-- makes me think of what Francis said about the brothers. One of the most powerful experiences for me in the community is living with the older friars, because I personally think it would be very hard for me to be a Franciscan living on my own without them. They are the ones I can look up to as good examples, or with whom I can even just have a cup of coffee in the morning and chat.

I know in my own faith journey as a Franciscan and a Christian, I am following Francis walking toward Christ and searching to have a good relationship with the Lord and my brothers. I would not have been able to accomplish anything without the grace of God and the help, support, and companionship of my brothers. Truly, the Lord gave me brothers. 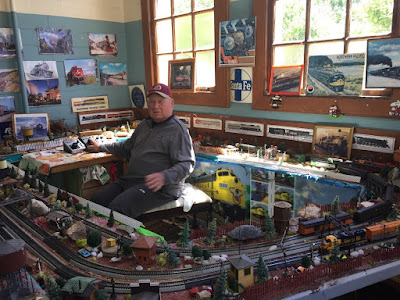 Br. Juan-Jose Jauregui has been a friar of St. Barbara Province since 2010. He is a native of Zacatecas, Mexico and moved with his family to the Bay Area when he was young. He is currently the Assistant Director of Formation for our Temporary Professed brothers at Mission San Luis Rey, Oceanside, CA.

Discovering My People Again: A Reflection by Fr. Adrian Peelo


In March of this year, just before the feast of St. Patrick, I accompanied the St. Barbara Parish Choir and Schola on a tour/pilgrimage to Ireland (March 8-18). It was strange to find myself a pilgrim in my own native land and I was surprised at how I could so easily give myself to the experience together with my fellow travelers from the United States.

What struck me and moved me most as we visited the holy sites associated with St. Patrick was the lingering holiness and rich spirituality that still pervades this small island.  His mission to the Irish nation began in A.D. 432 and despite a golden age of flourishing and four hundred years of destruction and devastation, the echo of his message lives in the very ether of Ireland.  Unlike in Italy or Spain one is not overwhelmed in Ireland by vast churches and cathedrals. There is an unpretentious beauty in the ruins of monasteries and friaries; in simple country churches and roadside shrines, ancient cemeteries, shrouded, silent, peaceful. Weather-beaten Celtic crosses have stood as sentinels of heroic witness for centuries with monastic round towers pointing heavenwards, insisting to be recognized as beacons of an enduring faith.  “ I pray to God to give me perseverance and to deign that I be a faithful witness to Him to the end of my life for my God.”  (Confessions of St. Patrick)

I discovered my own people again through the eyes of my American fellow travelers: the lilting northern accents and the gnarly dialect of my native Dublin.   The warmth and good nature of ordinary folk anxious to help and who laugh easily. A waiter in Armagh leaned in at the dinner table and asked, "Will you have a wee drop of soup, Mam?" to an astonished member of our group who looked back at him in total wonderment. "Mam" was really all she heard. There was great hilarity as things became clearer and two cultures embraced in kindness, courtesy and laughter. I was proud. “That's right, there's free beer in Irish paradise. Everyone's jealous.” (Overheard in the bar after dinner in Armagh).


St. Barbara Choir and Schola were wonderful wherever they sang, whether before the Cardinal in Armagh Cathedral or in the humble setting of Multyfarnham Abbey, the contemplative house of the Irish Franciscans. "Your singing has lifted my spirits" said a beaming Cardinal Sean Brady, Emeritus Archbishop of Armagh, St. Patrick’s own diocese. "Wherever you go in Ireland,  lift the spirits of the people with your beautiful voices," he said with obvious delight. And that they did. In St. Patrick's Cathedral in Dublin a young woman sitting beside me in the pew and who had come on a break from work whispered as the choir's short lunchtime recital came to a close, "Just what I needed, so beautiful."

The New World came to lift the spirits of the Old, returning with the gift received by so many children of Patrick long, long ago. In time, as poor immigrants they crossed the Atlantic Ocean to bring the precious hope of the Gospel in desperate times.  Their children came back with the hundredfold and it was a privilege for me to stand in the breach of such mystery.


Fr. Adrian Peelo is a Franciscan friar of the Irish Province. He has been living in California while ministering with the friars from St. Barbara Province for many years. He is currently Pastor of Mission Santa Barbara Parish.

Posted by Samuel Nasada Himawan at 2:40 PM No comments: