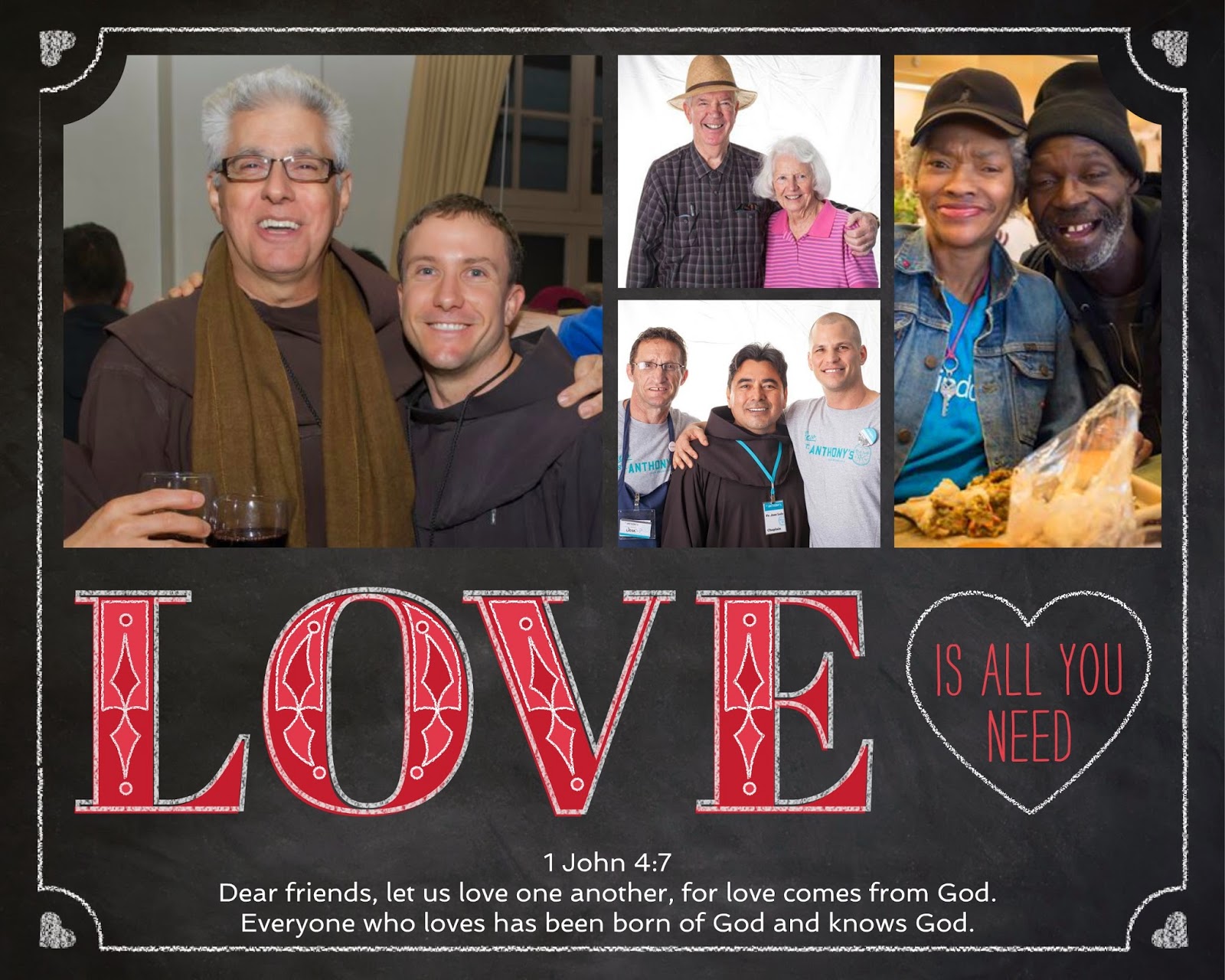 In today's friar profile we reflect on Fr. Christian Mondor, OFM who recently celebrated 70 years as a Franciscan friar of the Province of Saint Barbara.  He's known as the surfing priest and for the blessing of the waves, but that only hints at the depth of his Franciscan life.  Fr. Joseph Chinnici, OFM was asked to reflect on his life and ministry during a celebration of his life in August. 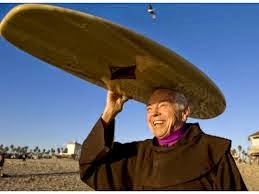 We have all gathered this morning to celebrate Christian's 70th anniversary as a Friar Minor.  I have been asked as a former provincial, an historian, and fellow educator to summarize in twelve minutes some of the significance of Chris' life as a Franciscan, a priest, a friend.  Good luck on the summary; the twelve minutes I can do.

Each friar of our province has in the provincial office an eight by twelve inch card summarizing the important dates and assignments of his life.  Having seen almost all of these, I can tell you quite clearly that Chris's is uniquely covered on both sides with minute scribbles detailing an astounding peripatetic journey, perhaps to be expected from the son of a salesman.  Here is a man who has been stationed in every region of our province: the southwest (2 years), the northwest (21 years); northern California (5 years); southern California (26 years).  He has lived in eleven different locations, spent four years in Montreal, one year in England, and engaged in every ministry except the Native American missions:  20 years in education, 24 years in parish work, 10 years in formation, 9 years in retreat work.

If you can imagine it, his business acumen has purchased land for one parish and overseen the building of another; he has worked as a Newman chaplain and served three years as President of a college.  Did you know that for one brief period he was "Dean of Discipline" in a high school:  We would all love to have been students at that time!

For most of the seventy years, having forgotten his suitcase and anything else that might prove useful, he has been travelling around in an old car, driving hundreds of miles on an open road, asking various hitch hikers to travel with him in some species of automobile he has attempted to reconstruct from purloined parts in a city dump.  You get the idea.  A future provincial reading this card, would probably come to the reasonable conclusion:  Why so many assignments; why so many friaries?  why so much movement?  This man must have been either a wanderer or a trouble maker.  While perhaps a reasonable conclusion from the bare facts, another story tells the truth.

In the Midst of Social Change

Richard Mondor, born in Los Angeles and growing up in Westwood, received the "habit of probation" and a new name, "Christian" upon entrance into his novitiate year on July 9, 1944, just over one month to the day after D Day, and one year and one month before the dropping of the atomic bomb on Hiroshima and Nagasaki.  Too young to be a member of the "greatest generation", he was old enough to experience first-hand the momentous changes which marked the passage from the Great Depression to the post-war boom.  In addition, his entrance into the Order is sandwiched in between the two major initiatives of Pius XII that would lead to the Second Vatican Council and make such a great impression on Chris' life:  the renewal of the Church around the Word of God (Divino Afflante Spiritu, 1943 and liturgical reform (Mediator Dei, 1947).  The habit of the friar which he received would be knit from these two threads of great social change and Church renewal.

The social change touched Chris's life most directly as he engaged the three great challenges of the 1960s:  poverty, war, and race.  In the middle of it all, as President of a noble but failed experiment, and teacher to high schoolers, collegiates, and ten young friars, he struggled to renew the Gospel life and fulfill his vocation around the three natural virtues which came with his disposition:  simplicity, peace, and openness to people.  A wanderer, yes, but one with an internal compass of committed perseverance.  Students from those days still testify to his impact on them.

These social changes accompanied the tremendous post-war growth of Franciscan ministries into Arizona and Oregon.  Chris wandered because the Province asked him.  In the 1950s, he experienced the cutting edge of the developments:  a participant in a new generation in Arizona bent on loosening up and old German system; a builder of new chapels in the northwest; a pioneer in a high school in Salem, and a teacher at the new high school seminary in Troutdale.  Everything spoke of efforts to make the Gospel come alive in the contemporary world.  The same pattern continued as he moved to California for new experiments in the formation of younger friars and the great venture of ecumenical education at the Franciscan School of Theology, Berkeley.  I remember his excitement upon coming to Berkeley and having an opportunity to learn by teaching liberation theology and engaging in ecumenical dialogue.

Growing up in a Province in movement, the missionary goals of the friars themselves led Chris into places wherever something new was occurring, wherever a challenge of evangelization was developing, wherever some boundary between people needed to be crossed.  What was desired was someone who was adaptable, open minder, person-centered, intellectually studious, and willing to serve.  Such qualities were accompanied, I might add, by an innocence of life that could be easily used by others and then suffered with some degree of courage by our wanderer.  The anchor of Chris's life became, over time and surrounded by these challenges, the twin sources of Scripture and liturgy.  He entered deeply into a faith filled meditation on the missionary journeys of Paul, the life of the pilgrim Jesus in the Scriptures, and the presence of the people of God in the celebration of the Eucharist.  A fine athlete from the beginning, he gradually grew into the habit he so enthusiastically received seventy years ago.

Such is the more truthful underlying story summarized on our personnel cards.  I mentioned at the very beginning the name our honoree receive when he first entered the Order:  "Christian".  After seventy years, we look back on it and know how appropriate it was.  Francis of Assisi always referred to each leper who revealed the sweetness of God's own Son to him as "Brother or Sister Christian"; he nicknamed his most significant follower, Clare of Assisi, "Christian."  For Francis it was a name most dear to his heart and summarized for him the central Gospel message of his calling.

Our own Christian is pretty close to the mark.  Have you ever had a cup of coffee with our Christian:  Isn't the conversation marked by his "gentle attentiveness", something the Lord himself brought to his work?  And, isn't it remarkable that after all this wandering and in the midst of all this change, our Christian has in abundance that quintessential characteristic of Franciscan life, what St. Bonaventure calls "admiration": Wonder: Wonder at creation as a man rides the waves of God's own ocean; Wonder at the marvelous work of God in contemporary doctors who can rebuild an injured chest; Wonder at the journey of a life itself that has experienced through brothers and sisters the providence of God's own faithfulness; Wonder at the marvelous five-stringed banjo, given by God to a genuine wayfarer, to lift his spirit along the way and invite others into the joy of community; Wonder, finally, at the people of God in Huntington Beach, Catholic and Protestant, Jew and Muslim, believer and unbeliever, who reveal to a wandering Christian the face of a God Who is Love Admultos annos, Christian! 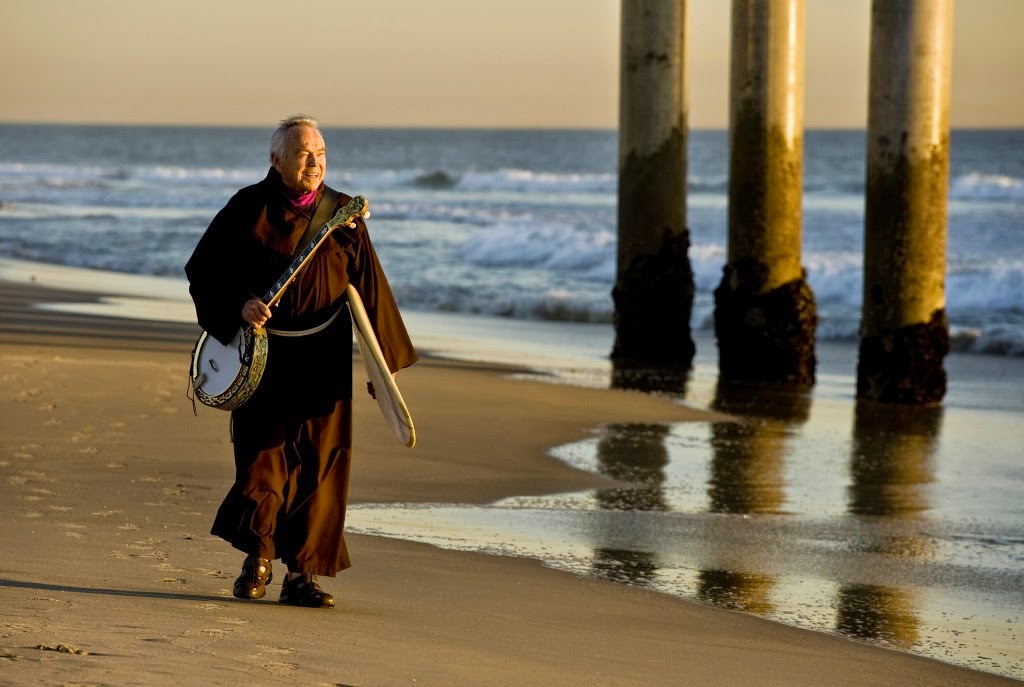 If you ever have the chance to meet Fr. Christian Mondor, OFM you can't help but experience a deep sense of joy that radiates from him.  Franciscan friars are called to walk in the joyful and prophetic spirit of St. Francis of Assisi.  When you are engaged in serving the poor, promoting justice, peace, care of creation do you radiate joy?